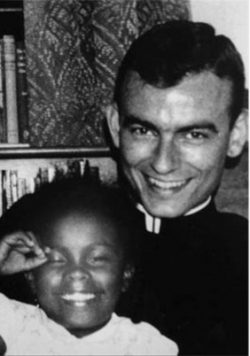 The Reverend Dr. Martin Luther King Jr., quoting the nineteenth century Unitarian minister Theodore Parker, said: “The arc of the moral universe is long, but it bends toward justice.”

In the half-century since Jonathan decided to leave New England and become involved in the civil rights movement, the concepts of social justice have evolved in ways which Jonathan could only have imagined. The anti-war movement, LGBTQ Rights, interracial marriage, state human rights commissions, the feminist movement, Disability Rights and Rights for the Elderly, concern for the state of the environment as a social justice issue, animal rights, to mention a few, have become areas where concerned citizens have attempted, often with great success, to create a better, more just world. These movements all sprung from the civil rights movement of the 1960’s, which demonstrated to American citizens that they had the power to effect change through direct action. And much of this took place in a time before internet capability, with its ability to stir large portions of the population to action in a very short period of time.

“Sometimes the call comes at the least convenient moment you can imagine, but whenever if comes, you must go.” – JONATHAN DANIELS

Jonathan’s life, and the lives of others like him, become templates for taking action for change. And while what Jonathan Daniels did was extraordinary, one senses from his writings that he would not have seen it so. Far from being a one-off sacrificial act, Jonathan’s intervention to protect Ruby Sales may be seen as a point on a continuum in his life which was nearly always present.

An examination of Jonathan’s life reveals many other examples of social action which get eclipsed by the drama and finality of his death: protecting his fellow cadets; his utter refusal to allow the privilege of his race, education, status and articulate nature to make him a person of more value than those with which he interacted; interviewing poverty stricken mothers in East Selma; attending the March on Washington, teaching poor children in Providence, Rhode Island; speaking truth to power within the hierarchy of his own church. These are acts of meaning and fulfillment imbedded in a life well-lived.

After Jonathan’s death, Dr. King wrote “. . . the meaning of his life was so fulfilled in his death that few people in our time will know such fulfillment or meaning though they live to be a hundred.” Fulfillment and meaning are concepts which can be achieved in a multitude of ways, of which the physical sacrifice of one’s life in the act of protecting another is one, although the most dramatic.

“I could not stand by in benevolent dispassion any longer without compromising everything I know and love and value.” – JONATHAN DANIELS

Thus, Jonathan becomes an exemplar of the real capabilities of what are often termed “ordinary people.” And one of the capabilities of these so-called ordinary people is to effect action in others. Virtually all of the people who worked with Jonathan ended up living lives of social dedication— indeed, even many of the children of Jonathan’s friends and associates work in the areas of bettering the world. Like a stone in the water, people like Jonathan Daniels inspire movement and action far beyond their initial point of impact. So, while Jonathan may not have lived to work in the subsequent areas of social justice, in an ultimate sense, he becomes a guidepost for those who, half a century later, wish to create a better world.

“One begins by listening—making sure that one is really listening. Then, there is the quiet matter of rolling up one’s sleeves.” – JONATHAN DANIELS

Tell us how Jonathan's story has inspired you.