Curious about Jonathan Daniel’s life as a child, teen, and adult, and the impact his work made on future generations? View our custom timeline below to learn more.

Jonathan Myrick Daniels is born on March 20, 1939   Marion Anderson sings at the Lincoln Memorial for an integrated crowd of 75,000 after being denied the right to sing in front of an integrated audience in Constitution Hall. First Lady Eleanor Roosevelt helped make the event happen.

The family moves around the south for several years while Philip is in the service. The family returns to Keene when Philip goes to France. He is wounded in 1945. Tuskegee Airmen, the first African -American military aviators in the US Armed Forces formed from  1941-1948.

Sister Emily is born in 1943   Legislation that will eventually become Title VI is begun by Adam Clayton Powell.

Both home and Dr. Daniels office. Jonathan and his friend Bob Perry had their secret hideout underneath. Jackie Robinson becomes the first African American to play major league baseball in the modern era 1947.

As a teenager, he attends New England Music Camp in Maine, and is a member of the Keene Children’s Theater, with sister Emily President Harry Truman became the first U.S. President to address the annual NAACP convention.

Injured in a fall from his roof after an early morning joy ride with a friend, he spends the next month in the hospital. 14 year old Emmitt Till is murdered in Mississippi for allegedly whistling at a White woman. Montgomery bus boycott begins.

Plays tuba in the school band and acts in school plays. The Nat King Cole Show premiered on television; the second African American to host a national television series.

Sang in church and school choirs

Sang in church and in the school choir. In June 1956, a federal court ruled that the laws in place to keep buses segregated were unconstitutional, and the U.S. Supreme Court eventually agreed. Rosa Parks started the boycott in Dec. 1955 that lead to this decision.

Jonathan was confirmed as an Episcopalian at St. James Episcopal Church in 1957.   Prayer Pilgrimage to Washington held at the Lincoln Memorial to commemorate Brown v. Board of Education.

Although personal touches were not allowed in VMI dorm rooms, Jon attached a glow-in-the-dark cross to the ceiling over his bed. He was also active in a number of clubs.

Father, Dr. Philip Daniels, dies in 1959.   Lorraine Hansberry’s A Raisin in the Sun was the first play by an African American woman on Broadway.

Elected Valedictorian by his VMI classmates in 1961.   Known as a “rat daddy” for his willingness to help freshmen (aka “rats”) The Albany Project (voter registration effort) begins in Albany, GA

VMI awards him the Woodrow Wilson and Danforth Fellowship prizes for graduate study. He is accepted at Harvard in 1961 for graduate study in Literature.   The “Tougaloo Nine” are arrested for using a “White’s only” section of the Jackson, MS library.

Attends Easter Sunday Mass 1962 and has an epiphany Voter Education Project begins in the southern states.

A summer in Keene

Spends summer of 1962 in Keene working as an orderly at Elliot Hospital and as a bookkeeper at a local small business President Kennedy sends troops to MS to quell riots opposing the admission of Black student James Meridith at U Miss.

Starts at ETS Fall 1963 Martin Luther King Jr. writes his “Letter from a Birmingham Jail” in response to religious leaders who criticized his tactics.

Joins the National Association for the Advancement of Colored People (NAACP) in  1963 NAACP Mississippi Field Secretary Medgar Evers assassinated in front of his house.

Meets Judith Upham, one of the few female seminarians at ETS, and they become friends Alabama finally admits Black students to the University of Alabama. 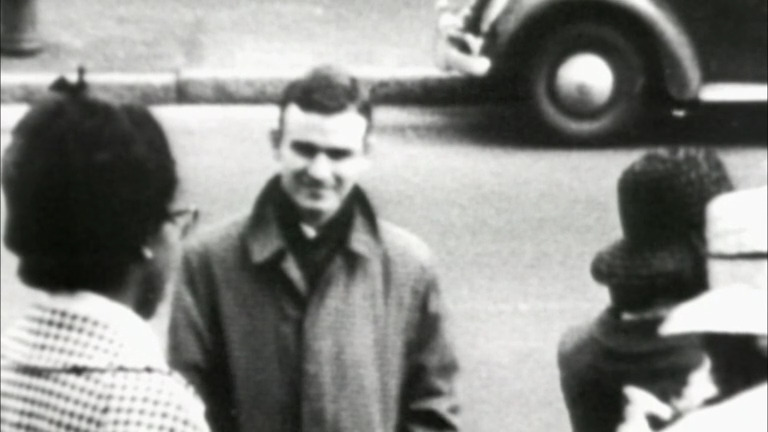 Works in a Providence Rhode Island parish as a youth counselor-part of his ETS training Four black girls attending Sunday school dies in a bombing of their church in Alabama.

Travels to Selma with other ETS students March 7, 1965 was “bloody Sunday” where civil rights marchers were beaten on the Edmund Pettis bridge in Selma, AL leading to the call from Martin Luther King, Jr.

The floor of MLK Jr. office

Jonathan and Judy lived with the Scott family until they are threatened with eviction for hosting White northern civil rights workers The year before, the 24th Amendment to the Constitution ended the federal Poll tax and a 1966 Supreme Court decision ends it for states.

Joins ESCRU, the Episcopal Society for Cultural and Racial Unity Formed in 1959, this unofficial church organization was formed to promote acceptance of racial inclusiveness. 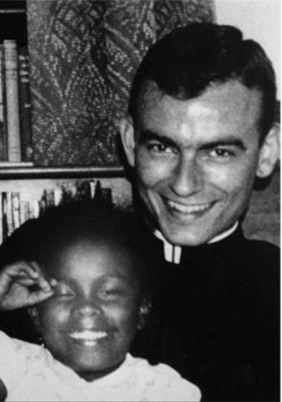 Moves to the West family home in the middle of the night. Because they own their home, they are less likely to be evicted for hosting White civil rights workers Lonzy West worked to help register voters Alice West taught citizenship classes, which were necessary to pass voter registration tests

Mass at the local Episcopal Church in Alabama

Begins bringing Black children with him to Mass at the local Episcopal Church in Alabama They must wait until after all White people have taken communion before they are given communion.

Letters to the Bishop

With Judy Upham, as ESCRU reps, they write letters to the Bishop of the diocese regarding segregation in the Church Calling the segregation a “new expression of the old slave gallery”.

Participates in boycotts of Whites-only stores and meets with local leaders to effect change “Sometimes we confront the posse, and sometimes we  hold a child.”

Returns to ETS to finish semester Successfully passes exams at ETS but needs extensions to complete other work. Spends time in Keene and gives a sermon at St. James Church

Returns to Selma July 1965 to work with ESCRU and SNCC Working with Eugene Pritchard, he develops a comprehensive guide to Dallas County social services.

Joins with the SNCC workers

Joins with SNCC (Student Non-violent Coordinating Committee) workers as they begin voting rights efforts in Lowndes County At that time, no Black person had tried to register to vote, or actually voted, in Lowndes County for over 30 years.

Jonathan is teargassed protesting for the right of Black citizens to register and vote in Camden AL He later wrote that with this experience he discovered a new “freedom” in the cross: freedom to love the enemy.

Dedicated himself to non-violence

He dedicated himself to non-violence in the model of Martin Luther King, Jr.  He wrote: “We go in ‘active nonresistance,’ not to ‘confront,’ but to love and heal and to be free.”

The bright red VW beetle drew too  much attention, so he found a small, fast car through ESCRU He and other activists were routinely chased and some like Viola Luizzo, were killed.

Supports a boycotting segregated local stores and is arrested in Fort Deposit, AL Arrested, they all are jailed.

After the initial arrest, the group is loaded into a trash truck and moved to Hayneville, AL Jon is eventually given a chance to leave, but opts to stay in solidarity with the group. The group often sang loudly as they knew everyone in the area could hear them.

A week in jail

While in jail, the arrested protesters sing songs, write letters and try to keep each other’s spirits up. Jonathan is offered a chance to have his bail posted, but refuses when he realizes not everyone  will be released. They spend a week in the Hayneville jail with bad food and water.

Releasing the group of protestors

A petition is filed in federal court about the arrests. To avoid a federal case, the Attorney General recommends releasing the group of protestors. Unexpectedly let out of jail, no one is there to help the group.

Released from jail with no notice, Jon, Ruby Sales, Rev. Richard Morrisroe and Joyce Bailey walk to the Cash Store to buy a cold soda. They are met at the door by a local part-time deputy sheriff. He opens the door with a shotgun in hand.

The deputy aims his gun at Ruby Sales, who is in front. Jonathan pushes her out of the way and is shot and killed instead.  Rev. Morrisroe is shot in the back as he and Joyce try to run away. Rev. Morrisroe spends 11 hours in surgery and many years recovering.

A family friend flies him home

It took the intervention of a Senator to find out which funeral home had his body. Eventually a family friend flies him home.

Funeral on August 24, 1965 was attended by almost 1000 people Stokely Carmichael, Ruby Sales, Alice West, and other members of SNCC drive up from Alabama President Johnson sends a telegram to Connie Daniels saying that he “grieved with her.”

Martin Luther King, Jr. said of Jonathan pushing Ruby Sales out of harms way: “One of the most heroic Christian deeds of which I have heard in my entire ministry and career for civil rights was performed by Jonathan Daniels….”

Trial of the deputy sheriff

After a week of trial, Jonathan’s killer is acquitted by an all white, all male jury. A columnist for the Atlanta Constitution observed that “press reports there was a trial this week in Hayneville, AL, but this was in error. No trial was held there within the accepted meaning of the word.”

White V. Crook eventually leads to the Jury Selection Act of 1966, which is enacted by President Johnson. This opens jury selection to all citizens, including Black men and all women.

1997 VMI takes on and expands the Jonathan Daniels ’61 Humanitarian Award In addition, an arch is formally dedicated in the name of Jonathan Daniels. There is also a memorial courtyard at VMI

Rep. John Lewis receives next JD Humanitarian Award in 2015. Rep. Lewis speech is available on YouTube. Rep. Lewis was one of those injured on the Edmund Pettis Bridge on the walk from Selma to Montgomery.

In 1994, the Episcopal Church designated August 14 as a feast day for martyr Jonathan Daniels. Pilgrimages and other events take place in his honor on this day every year. 1999 movie “Here Am I, Send Me, the Story of Jonathan Daniels” is produced 2004 Reston Chorale produces Chorale in his honor.

Various stained glass pieces, sculpture and plaques are erected in Jonathan Daniels name St. Patrick’s cathedral in Washington, D.C. Sewanee College St. John’s Memorial Chapel in Cambridge, MA Sculpture of Jesus in the Garden of Gesthemi, created by sculptor Walker Hancock, is donated by William Coolidge of Boston, MA. for the Abbey at Gethsemini in Kentucky.

2015 Sculpture added to the Human Rights Porch of the National Cathedral Designed by Chas Fagan and sculpted by stonemason Sean Callahan.

Added to the Canterbury Cathedral (England) Book of Martyr’s 2015 Jonathan Daniels and Martin Luther King Jr. are the only American martyrs listed here.

Tell us how Jonathan's story has inspired you.